An exclusive interview with Mr. Minaee the CEO of DIOPARS / Issues regarding import of dental goods in recent months 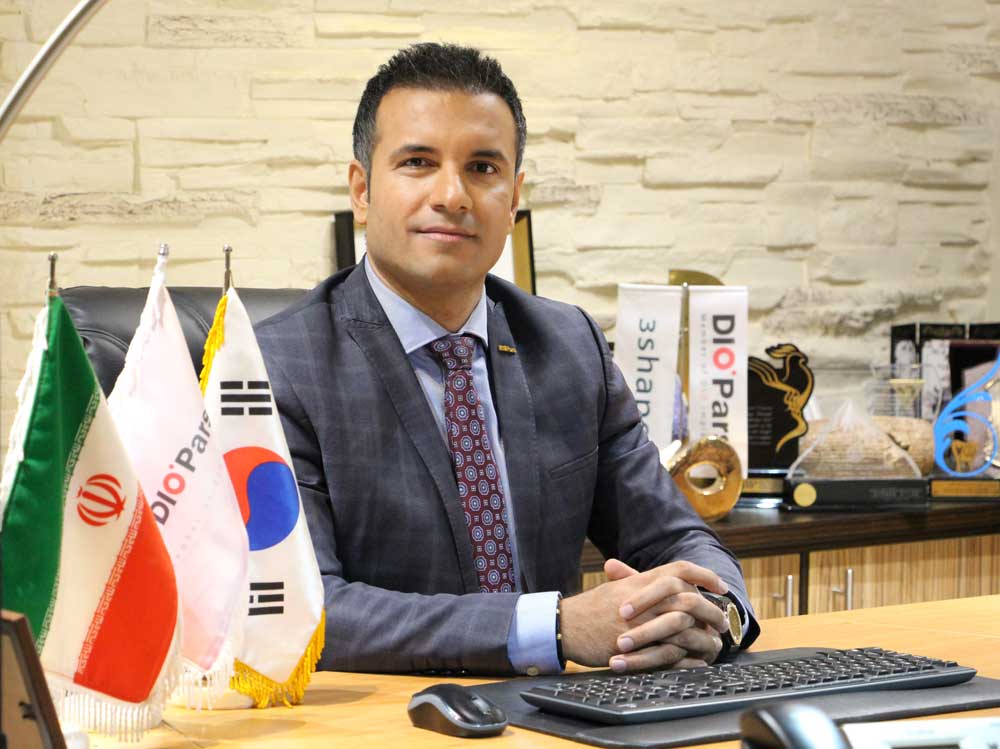 Dear Mr. Minaee, we appreciate you for the time you gave us and would like you, as the CEO of Iran’s the biggest dentistry company with more than 130 employees and 20 offices all over the state, to answer dentists’ questions and ambiguities caused by the present situations.

Nowadays, regarding the present and future sanctions, Iran is in a completely unusual and emergency situation, which is seen in all industries and …. .

Most companies’ goods, including goods exposed to corruption, are in customs. Because neither foreign currency has been allocated to many companies nor they are authorized to release their goods.

So, dentistry companies are not expected from the rule, and dentistry goods suppliers and manufacturers have faced with crisis. Although, Dio Pars Company owes several cargos in the custom, it could release only a bit. Therefore, the company was not able to meet esteemed dentists’ needs, sufficiently.

Over the past two months according to Dio Pars’ new strategy and in order to optimum allocation of sources & goods, we transferred the stocks of our all offices to Tehran’s head office so that after receiving orders from dentists in other offices, we can send the items to them via our experts.

Due to the possibility of the state’s situations deterioration in near future, Dio Pars has to be equipped with new policies and more accurate planning for difficult situations. So, companies’ sales terms will not be flexible like before.

Presently, we have to gather Dio Pars’ amounts receivable, maximize cash to import and maximize assurance inventory, for one year use. The company knows itself charged giving service to all dentists and it specially considers their collective and long-term benefits.

Concerning foreign currency allocation limitations from the state’s side and imports problems, Dio Pars has to manage the stocks so that it can meet the needs of more than 4,000 customers in a desirable manner. Therefore, we are excused of selling items in a large number.

Besides, we expect our old users, companies’ masters and advisors not to request us specific sales terms or showing favoritism in settlement and support us like before in solving problems by comprehending the present situations.

We request all dentists to support us by paying back their debt even if it is not much to supply cash to import more goods and increase assurance inventory for more demanding situations.

Beforehand, we apologize for the situations that resulted in dissatisfaction of some of you and want your cooperation through collaboration with Dio Pars experts and accompaniment with necessary strategies to the crisis management so that the company can meet your needs in the crisis period, too. We hope to finish this period as soon as possible and the state will return to its usual estate.

Dio Pars imported goods price are declared based on foreign currency drafts and computing cost price. So, we have to wait new strategies of pricing. Since the last week it was announced that regarding foreign currency limitations, currency allocation for dentistry goods would be stopped, that in this case companies must import goods with free foreign currency which results in significant price increase.

Dio Pars senior manager believes dentists and the company are business partners that cause one another progression and value added development by cooperation, unity and giving high quality services to patients.

Indeed, all of us are in the same boat and our income is obtained through patients, so our aim is to achieve patients’ consent, finally.

If we have the same look, not only many misunderstandings will not be created but also we will minimize the sanction effects on our work, through cooperation and unity. The esteemed dentists are expected to comprehend the state’s conditions and cooperate importing companies with more patience.

However, dentistry and medicine are of humankinds’ primary needs. We expect government and decision-making authorities to allocate foreign currency and available sources, correctly and control the problems we have faced with during the recent weeks and not to allocate the limited foreign currency to unnecessary goods such as automobiles, cell phones, household appliances and etc.. The state’s priority is the health priority and the goods directly related to people’s health should be in foreign currency allocation priority and should be imported easily.

Undoubtedly, when dentistry goods price like implant increases, the cost price for dentists increases, too. But dentistry associations and masters of the area are authorized to remark.

I believe that price increase will have impact on offices’ referrals. The overall estimate is that by price and tariffs’ increase, request for inessential treatments will decrease, definitely and most referrals will be only for necessary treatments.

We appreciate your interview, and hope to pass the crisis by the state’s senior managers’ decision-making and national problems will be solved. We also hope our country will be in a situation that our precious countrymen deserve it.